Snow causes loss of over £1 billion!

Am I the only person who doesn't care about the loss of £1 billion yesterday? All the news bulletins were focused on road and rail chaos (yes, admittedly it is important to know), and how businesses would suffer as a result of Mother Nature covering us in the most beautiful blanket of snow we've seen for years. At the end of each bulletin though, it showed the photographs which we were all sending in.....families having fun tobogganing by whatever means possible, trays, bin liners, actual toboggans if you were lucky enough to have one and, like my youngest son, even ski-ing. One clip showed a gentlemen who announced with glee "I've wanted to do this for YEARS" as he sped off on his skis down his urban street. I bet it took years off him! We walked through the woods with our neighbours and their children, with the grown-ups shaking the trees over the heads of the children causing them to collapse screaming and giggling under masses of snow. It was magical. 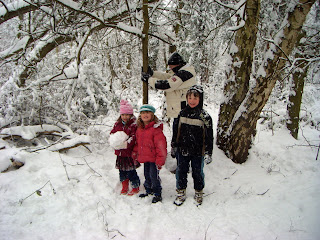 We have lived in our street for 22 years without meeting as many people as we met yesterday. Our son compared it to the 19th century when the streets were full of people - not vehicles. I didn't meet anyone who appeared to be worrying about the loss of £1 billion - did you?
There was a TV clip of a gentleman who was berating the government for not clearing the roads. He described us as "being like a third-world country". What a shame. This weather happens so rarely in our part of the world (the south of England), how can we justify spending millions on snow-clearing equipment which only comes out of the hangar once every 20 years. Boris Johnson tickled me pink (yet again) when he said in an interview that "It's the right kind of snow, just the wrong quantity of it". I am still laughing about it. Thank goodness that we've now got Boris and Barack instead of Ken and George! One says exactly what he thinks, regardless of whether its pc or not and the other means what he says - in no uncertain terms.
Anyway, the reason for this blog is because I wanted to say that Mother Nature is the BIG boss and we would do well to remember that and SURRENDER to the joy that she brought to us all yesterday. If everything comes to a standstill for too long, yes, we need to get it clear so we can deal with the health and safety of the frail and make sure everyone has enough food. But ONE DAY - come on - let's just all enjoy it. I've always said that we are our children's memory makers - when our children look back to February 2009 will they remember the fun in the snow or the fact that businesses had a bad day? No need to ask. Us Brits are ALWAYS great in a crisis - that wartime spirit is just under the surface waiting to come out so we can get creative. I have heard that people are much happier now than they have been in a long time, despite the credit crunch. We are discovering the fulfilment of cooking from scratch again, of "make do and mend" and trying to find ways to save energy.
A few years back, whilst caught in a bomb scare on the island of Ibiza, thousands of us were stuck on a concrete road in the July heat for 5 hours while the police carried out a controlled explosion in the airport. The Red Cross did us proud - arriving eventually with millions of bottles of mineral water. We saw angry people, frightened people, kind people who gave their hats to the disabled in wheelchairs and we saw that good old British spirit in the face of adversity. I did ask this man's permission to take this photo, because to me, he represented the essence of our countrymen - he surrendered to the situation and did the only thing he could do to avoid sunburn - HE PUT A CARDBOARD BOX ON HIS HEAD!!
Enjoy the snow, won't you............... 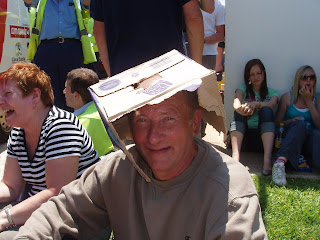