I had the strangest dream two nights ago...... I was standing watching a burial alongside lots of other people (some of whom were the stars of Coronation Street - don't ask where that came from!). I don't recall in the dream whose burial it actually was, but there was a lot of grief surrounding it - so many people hurting........ I woke feeling disturbed and uneasy and as the day went on, I realised that it had been my burial, well at least symbolic of my burial. Since then, so much has become clear to me and I hope that by sharing my thoughts here, I can make sense of what has been happening to me this year and hopefully provide my friends with some sort of explanation, not to mention the wonderful, wonderful people who have been waiting so patiently for my next CD.

Since August last year, my family and I sadly watched as one of our closest friends battled cancer. Our friend Nick had always been debonair, charming, full of fun and his jokes were terrible! We always said that in his role of 007, Roger Moore must have got his corny lines and jokes from our friend Nick - it was, of course, the other way round. Watching him deteriorate over the months was so sad, y 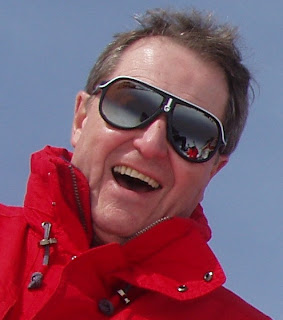 et through all his pain, he was still immensely quick-witted and kept us entertained with his corny one-liners. We had many happy summer and winter holidays with Nick. In his James Bond style, he was dressed in red from head to toe on the ski slopes, including a red headband! This is a photo of him in Italy in 2006 - he skied with us until he was 75 years old. In early May, just before we were due to leave for our holiday in America, we visited Nick in hospital and both Graham and I knew we were seeing him for the last time. Just before we left, Nick quietly said "Jan, this place you are going to is meant to be very powerful isn't it?" "Yes, Nick, I think so." I replied. "While you are there, will you................" He was finding it difficult to say the words so I just said "Yes, Nick, we will.............". We gave him a final kiss and told him how much we loved him and he told us he loved us too. As we left Nick's room, heartbroken, we both knew that Nick was trying to ask us to pray for him. Although we didn't find out until several days later when we managed to get through to his wife from America, Nick died just as Graham and I were leaving for the airport to fly to America. We like to think that he chose that moment so his spirit could come with us on one last holiday.

Graham chose a special place at the base of the sacred mountain of Bear Butte to offer prayers of gratitude for Nick's life. It was very emotional but as we looked out over that vast, sunny landscape, with the power of the wind spirit all around us, we knew that Nick was with us. Before we left Bear Butte, Graham chose a tree where we could leave a prayer tie blowing in the wind for him. It really is the most beautiful, sacred spot - I know Nick would have approved. We got back in time for Nick's funeral and our family wore RED!

Yesterday we attended a service for Nick at the Royal Hospital, Chelsea where his name has been placed on brass plaque on a bench. Appropriately enough, the bench is placed right outside the Chelsea Pensioner's bar - Nick would have approved of that too.

The reason I am going to such lengths sharing all of this is because I have suddenly realised how much I have been struggling and why I have non-consciously shut myself away for the last year. In my role as a therapist for the last 13-odd years, I have sadly neglected my own emotional (and physical) healing. As is often the case, it is not until we stop, that we finally realise how drained we are. Except that I still didn't realise it. I just kept trying to work, trying to write, trying to keep on top of my jobs and failing miserably. During this process, I now realise I have (non-consciously) withdrawn from the world "outside". I haven't been in touch with my friends, often I didn't want to answer the phone. I was so afraid that someone would ask me to do something that would require me to give something of myself and I was just so emotionally exhausted, I couldn't face it! I managed to present a couple of workshops but nowhere near the number I would have liked to do. Aside from losing Nick, other challenges have presented themselves this year but my ego wouldn't allow me to own up to feeling that I couldn't cope - after all, my role has always been to help others to feel better - I have never been very good at asking for help for myself, even as a child. I have always tried to pick myself up, dust myself off and keep going, no matter how much I was suffering inside. (I am being reminded now of a swan......calm and serene on the surface but paddling like crazy underneath - that's me!)

My dream the other night has changed all that. I don't want to be "buried" under all the times I haven't asked for help. Buried under all the guilt I feel for shutting myself away, all the guilt I feel for not producing the work I had hoped to. It is time for me to clamber out of the hole, put my hands up and say "OK, I messed up" and I have decided to do this publicly because I am sure many of you will relate to similar feelings.

Yesterday, I surrendered all my feelings to Archangel Gabriel and asked for help. Since then, I have been flooded with creativity. I was awoken at 6.00 a.m. this morning by the Angels, who were giving me so much information, I had to get up quickly to write everything down. In surrendering and asking for help, I finally feel able to begin again with a new creativity.

I hope my friends will forgive me for "disappearing" on them - I promise I will answer the phone when you call. I promise to admit when I am floundering and I promise to ask for your help. I also promise to say "No" (nicely) if I am asked to do something that I really don't have the energy for.

Thank you Archangel Gabriel for helping me to admit to my fragility and share it with the world. In doing so, you have returned to me the freedom of creative words and speech.

With love and blessings